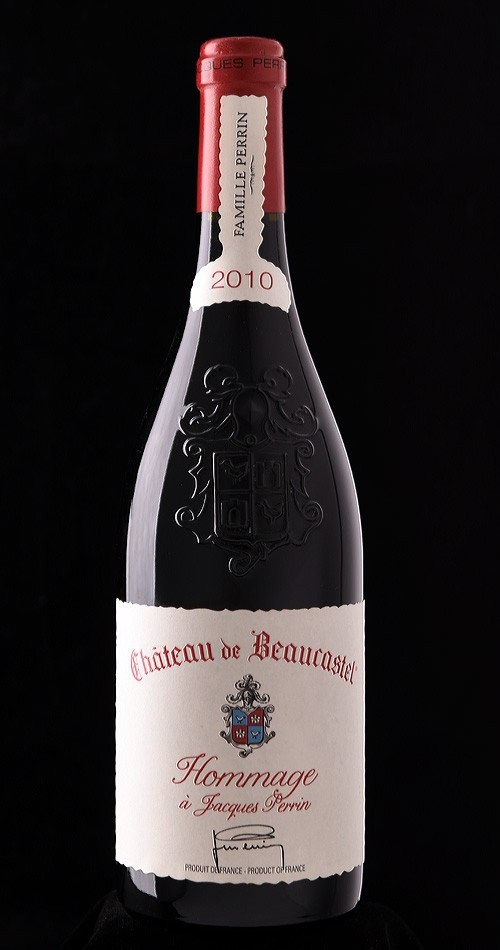 "Tight, dense and backward, the 2010 Châteauneuf du Pape Hommage À Jacques Perrin was one of the least approachable wines in the lineup, yet certainly has incredible potential. Offering lots of liquid minerality, crushed rock, blueberry, truffle and cassis, it’s massive and concentrated on the palate, with building tannin, good acidity and a firm, focused feel that begs for cellaring. Hide these in the cellar for another decade.

Coming mostly from a plot of old vines located behind the estate, the Perrin Family’s Châteauneuf du Pape Hommage à Jacques Perrin was first created in 1989 and is a tribute to the late Jacques Perrin, who passed away in 1978. Aged all in foudre and normally a blend of 60% Mourvedre, 20% Grenache, 10% Counoise and the rest Syrah, it’s only produced in top vintages and there’s normally a scant 400-500 cases to go around. It’s an incredible, yet atypical Châteauneuf du Pape due to its high Mourvèdre content. While most vintages require upwards of a decade of cellaring, the more forward, sexy vintages can certainly be enjoyable in their youth as well."

"No such issue exists with the perfect 2010 Chateauneuf du Pape Hommage a Jacques Perrin. I don't know what more a wine could offer. Inky blue/purple, with an extraordinary nose of smoked duck, grilled steaks, Provencal herbs, blackberries, blueberries, kirsch, licorice and truffle, enormously massive, concentrated, full-bodied and built for 30-50 years of cellaring, this wine, which is dominated by its Mourvedre component, is a tour de force, a spectacular, world-class wine. It is going to require some patience, though, and seems to need 4-5 years of cellaring. It should again be almost ageless in its potential.

As I said last year, the Perrin family is a large one indeed, with brothers Jean-Pierre and Francois sitting at the top of the hierarchy and their four sons, Mathieu, Pierre, Thomas and Marc increasingly taking charge of their negociant business and their extensive estates throughout Southern Rhone. Now controlling over 1200 acres, as well as having a network of contracts, this operation is the equivalent of a major Southern Rhone train operating at high speed. Moreover, they are doing some incredible work in all price ranges. Other 2011s that the Perrin boys have produced include the following wines, which were very good across the board, especially for 2011s. In particular, readers need to take a hard look at their estate in Vinsobres, which is making the finest wines of that appellation, and more recently, what they are doing in Gigondas with the estate they purchased there, Clos des Tourelles. These are special wines. There are now three cuvees of Gigondas from the Perrins - the Gigondas La Gille, the Gigondas Vieilles Vignes and the Gigondas Clos des Tourelles. All three merit serious attention. Tasting the 2010s, which were all set to go into bottle right after my visit, certainly shows that this vintage is impressive, although I'm not sure that Marc and Pierre Perrin haven't done as good a job with their selections in 2011. Three cuvees of Gigondas look to all have outstanding potential and will probably be in bottle by the time this report is published."