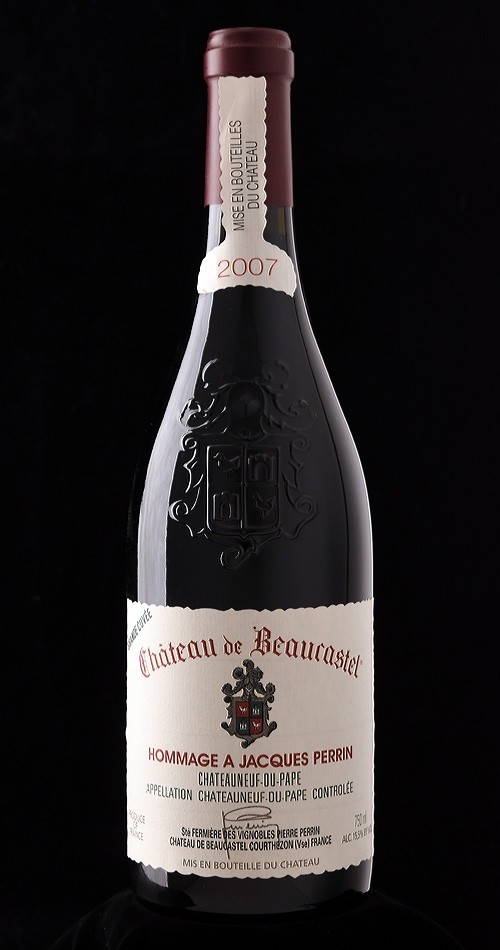 "The star of the show was the 2007 Châteauneuf du Pape Hommage À Jacques Perrin, which in this vintage is a classic blend of 60% Mourvedre, 20% Syrah, and the rest Counoise and Grenache. Inky colored and insanely perfumed, with to-die-for notes of lavender, Provencal herbs, roasted meats, black cherries, truffle, crème de cassis and licorice, it flows onto the palate with massive concentration, a stunning mid-palate and a thick, rich texture that never gets heavy or cumbersome. This is blockbuster stuff that just could not get any better. Drink it anytime over the coming 3-4 decades.

Coming mostly from a plot of old vines located behind the estate, the Perrin Family’s Châteauneuf du Pape Hommage à Jacques Perrin was first created in 1989 and is a tribute to the late Jacques Perrin, who passed away in 1978. Aged all in foudre and normally a blend of 60% Mourvedre, 20% Grenache, 10% Counoise and the rest Syrah, it’s only produced in top vintages and there’s normally a scant 400-500 cases to go around. It’s an incredible, yet atypical Châteauneuf du Pape due to its high Mourvèdre content. While most vintages require upwards of a decade of cellaring, the more forward, sexy vintages can certainly be enjoyable in their youth as well."

"No Hommage a Jacques Perrin was made in 2008, but the 2007 Chateauneuf du Pape Hommage a Jacques Perrin is an utterly perfect wine. Composed of 60% Mourvedre, 20% Syrah, and the rest Counoise and Grenache, this prodigious effort boasts an inky/blue/purple color to the rim in addition to an exceptional bouquet of camphor, roasted meats, blueberries, black cherries, black currants, truffles, beef blood, pepper, and incense. The sumptuous aromatics are followed by a wine of compelling intensity, full-bodied power, perfect balance, laser-like focus, and a finish that lasts more than a minute. The 2007's texture reminds me of the 1998 Jacques Perrin, and the freshness of the fruit and explosive aromatics are to die for. There are only 500 cases of this legend in the making, but for those lucky enough to find any, it will last for 40-60 years.

One of the great estates of the Rhone Valley, Chateau Beaucastel has been run by several generations of the Perrin family, beginning with the late Jacques Perrin (who died in 1978), then the brothers Jean-Pierre and Francois, and now their sons Thomas, Marc, Pierre, and Mathieu. Beaucastel has nearly 200 acres in vine in Chateauneuf du Pape, and they have branched out with an impressive operation under the Perrin et Fils label, purchasing grapes and acquiring land (in Vinsobres and Gigondas, for example). Their goal is to become the most recognized name for high quality wines in the southern Rhone. As shrewd consumers know, one of the best values in under $10 a bottle wine is La Vieille Ferme. The Perrin et Fils cuvees include wines made from purchased grapes as well as their new acquisitions in Vinsobres, Gigondas (25 acres), and the Cotes du Rhone village of Cairanne (35 acres). The Perrins enjoyed tremendous success with their 2008 red wines, largely because yields ranged between 18 hectoliters per hectare for Beaucastel, to only 20 hectoliters per hectare for Coudoulet. The mildew that affected everyone was the culprit. The entire family acknowledged there was an extraordinary triage and culling out of the grapes at the sorting tables."

"The 2007 Chateauneuf du Pape Hommage a Jacques Perrin, a blend of 60% Mourvedre, 20% Syrah, and the rest Counoise and Grenache, was assembled, and it is another wine that flirts with perfection. I recently had a bottle of the 1990 Jacques Perrin in the company of some Chateauneuf du Pape titans from that vintage, and the Jacques Perrin blew us away. The 2007 is dense, blue/black-colored wine with an extraordinary nose of roasted meats, blueberries, blackberries, cassis, tar, truffles, blood, asphalt, pepper, and incense. I could keep going as it seemed like it changed every time I put my nose back in the glass. The wine is enormously full-bodied with an extraordinarily high level of concentration, and monster, but sweet and seamlessly integrated tannins. This is a 50-60-year wine that should be given a decade of cellaring. As always, it is a privilege to taste at this great estate run by a family that has earned all the success it enjoys.

Beaucastel and its subsidiary wines marketed under the Perrin et Fils moniker are consistently among the bright shining stars of France. I have been visiting this estate for nearly thirty years, and over that time I have seen all the elements of what makes wines great – an incredible respect for the vineyards, a conscientious, uncompromising work ethic, and extraordinary passion for gentle handling of fruit from their sites. Brothers Jean-Pierre and Francois Perrin seem to be gradually inching closer to retirement as their sons take more and more of a front row seat in the running of this outstanding estate. This is a marvelous portfolio of wines, from the extraordinary values, to the top-end world classics. While one could say this is as traditionally run estate as can be found in western Europe, the Perrins are remarkably flexible if they sense that quality can be improved. Quality rises dramatically with the Perrin et Fils cuvees. The Cotes du Rhone Reserve wines are produced primarily from the estate vineyards at Grand Prebois and Vinsobres, with some purchased fruit from such Cotes du Rhone appellations as St.-Gervais. Marc Perrin, who is responsible for winemaking at Perrin et Fils, seems to go from strength to strength with this line of wines, which includes negociant bottlings as well as some from estate vineyards in Vinsobres."