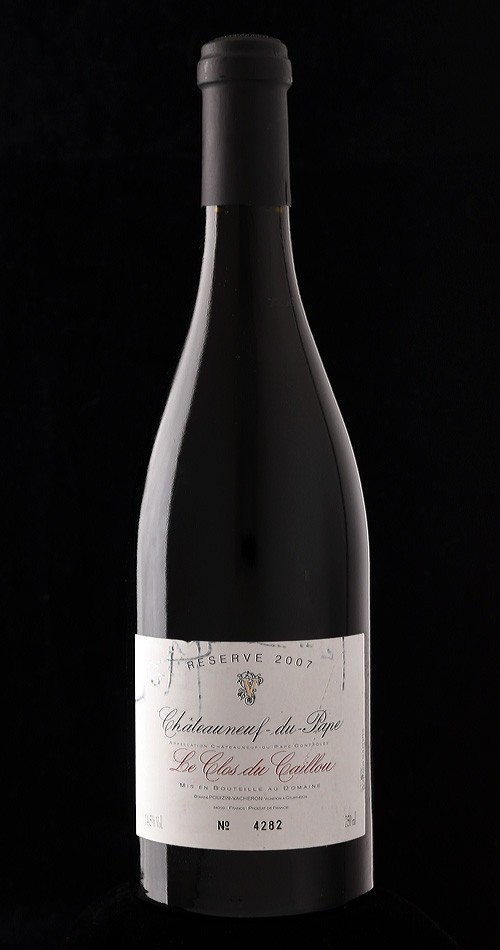 "The largest scaled and most concentrated in the lineup is easily the 2007 Chateauneuf du Pape La Reserve, which is 70% Grenache and 30% Mourvèdre that was raised all in demi-muids. Just a flat out sensational bottle of wine, it offers tons of black currants, licorice, roasted meats and toasted spice aromas and flavors in a full-bodied, seamless, perfectly balanced style that’s drunk well since release. It’s great today, but has another decade or more of longevity."

"Just another perfect wine (ho hum), the 2007 Chateauneuf du Pape Reserve Le Clos du Caillou is an incredible effort that matches the 2010 in terms of quality, yet has a larger-than-life, richer and more over- the-top style. Loaded to the gills with sweet black cherry, cassis, licorice, lavender, roasted meats and creamy licorice, it hits the palate with a massive, full-bodied profile that carries awesome fruit, building, sweet tannin, incredible depth and blockbuster length. Spectacular in every way, enjoy it anytime over the coming two decades.

This was a massive tasting with the team at Clos du Caillou and we went through each of their cuvees going back more than a decade. While the domaine has been in the Pouizin family since 1956, with Claude Pouizin running the estate through 1996, most of the production was sold off to negociants until around 1993. In 1995, Claude’s daughter, Sylvie, married Jean-Denis Vacheron, and the couple took over running the estate. Unfortunately, Jean-Denis died in a tragic traffic accident in 2002. Today the estate is run by Sylvie, the wines are made by Bruno Gaspard and consulting advice is from Philippe Cambie. Located on the eastern edge of the appellation, in the Courthezon district, they produce up to three Chateauneufs (Les Safres, Les Quartz and the Cuvee Reserve) in any vintage. In addition, they produce a white Chateauneuf du Pape and a number of smoking Cotes du Rones, which come from vineyards bordering Chateauneuf du Pape (identical terroir, actually) and are top- quality. We started the tasting with their base Chateauneuf du Pape, which comes from Safres (sandstone) soils located around the estate. It’s always based on 50+-year-old Grenache vines (95% or higher) and is aged all in older foudre. While this cuvee is called Les Safres today, it was labeled as their traditional Chateauneuf du Pape up until 2005. Moving to the Les Quartz Cuvee, this was first made in 1999 and comes mostly from the Les Cassanets lieu-dit, yet incorporates a small amount of Syrah from Les Bedines. It’s normally a blend of 85% Grenache and 15% Syrah, with the Grenache aged in a combination of oak tanks and foudre, and the Syrah in new barrels. While the Reserve gets most of the attention, Grenache-lovers need to check out this cuvee as it always offers thrilling fruit and texture, with an exuberant, Grenache-driven style. The top release from the estate, their Reserve release was first made in 1998. It is a blend of 60% Grenache and 40% Mourvedre (this is sometimes a split of Syrah and Mourvedre) that’s aged mostly in 1-2-and 3-year-old, 600-liter demi-muids for 18 months. Where the Les Quartz release is more exuberant and Grenache-dominated (both in style and in the blend), this cuvee, which comes from mostly sandy soils, always has more elegance and polish, as well as rock-star concentration and muscle. In addition, it performs beautifully in more difficult vintages as well."