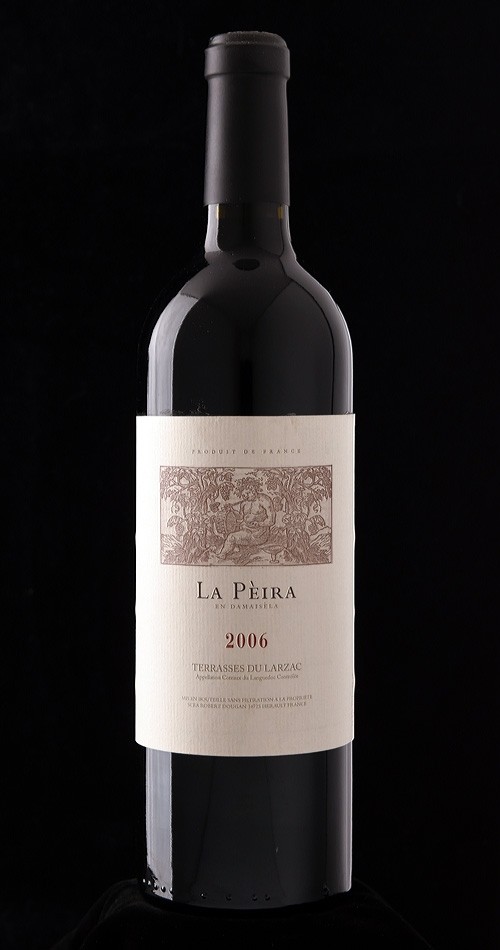 "The 2006 Terrasses du Larzac la Peira comes from a cooler vintage where the team used additional saignée to boost the concentration level. Deep, rich and concentrated, it's starting to show some maturity in its darker, chocolaty fruits, currants, licorice, and graphite aromas and flavors. Rich, full-bodied and beautifully balanced, it's drinking right in its maturity window, but has plenty of life. I would drink bottles over the coming 4-5 years, but it will certainly keep longer."

"Mocha, honey, cassis, lightly-cooked cherry, and iris inform the strikingly bitter-sweet and complex 2006 Coteaux du Languedoc Terrasses du Larzac La Peira. Its confectionary hints as well as its ultra-polished texture suggest butter cream on the palate, with bitter-sweet floral perfume wafting throughout, and the same reservoir of fresh-fruit juiciness that is retained by all of the wines in this collection. The lift and refinement surpass the already in those respects remarkable Las Flores, although this cuvee is slightly less enveloping in its richness. A shimmering, crystalline sense of minerality here is no less remarkable for being illusive, and is in distinct contrast with the chalky manifestations found in the 2007.

La Peira en Damaisela is the property of London-based composer Robert Dugan, located between Jonquieres and Aniane, on two adjacent parcels of no known previous distinction, but to which in 2004 instinct led him either with remarkable prescience or remarkable luck. The deep alluvial fan that is the basis for this site is only barely tilted, as it might be in St. Helena or Rutherford, St.-Estephe or Pomerol ... and these comparisons will not seem inapt once you experience the quality of La Peira’s wines. Claude Gros (of Chateau de Negly fame) consults here, expense seems not to have been spared on a new facility (with, of course, lots of new barrels), and Bordeaux-trained Jeremie Depierre is the hands-on (or, as I am sure he and Dugan would prefer me to put it “hands-off”) winemaker. New barrels of 500-600 liter capacity are favored here, incidentally, rather than classic (225 liter) barriques. I had the good fortune to taste the La Peira cuvees of 2005 and 2006 in late 2007 – before any wines had been released – and again this past December, when I tasted the extraordinary 2007s here for the first time. As this report goes to press, the first of the three red bottlings is about to be released in its 2007 rendition, but neither of the two other red cuvees from the 2006 vintage although all three were bottled at around 20-22 months has even been released yet."